In light of COVID-19, the U.S. Census Bureau has postponed or extended many of its operations.

(As of August 6, 2020) You can still complete the Census online, over the phone, or by mail. To complete your 2020 Census online, visit www.2020census.gov. If you have any questions about the Census, suspect a scam, or would like to complete your questionnaire over the phone, please call 844-330-2020 for assistance in English. For foreign-language phone assistance, please visit this page for the appropriate phone number.

Census takers, known as "enumerators," are out knocking on doors right now, but people are still encouraged to self-respond online or over the phone as soon as possible. Responding yourself can avoid a visit from a Census in-person enumerator. The reference day of the Census (April 1, 2020) has not changed.

More information on the Census Bureau’s current operational plan in light of COVID-19 can be found here.

2020 Census Mailings - A timeline of what mailers will go out when, and what they look like

ACNJ resources for advocates and communities

Guide: How To Host A Census Kiosk

The Census 2020 is Coming: What You Need to Know (English) (Spanish)

Household Living Scenarios: Who Counts Where? - Factsheet illustrating how individuals should be counted on the 2020 Census questionnaires (English) (Spanish)

Counting young children in the 2020 census

These charts analyze the characteristics of children ages 0-9 of various racial and ethnic groups in New Jersey, breaking down 2010 Census data and revealing why it is so important that we get the 2020 Census counts right.

Why is the Census so important?

Every 10 years, the U.S. is mandated by the constitution to count every person in the country.  The next decennial count, the 2020 Census, is coming up in March-April 2020. It is important that every person is counted, but in New Jersey there are many residents that are "hard to count." That is why outreach and education efforts are necessary to ensure everyone is counted.

About 22% of New Jersey residents (almost 1.9 million people) live in a hard-to-count area.

New Jersey has some of the hardest-to-count cities and congressional districts in the nation.

About the Census 2020 NJ Coalition

The Census 2020 NJ Coalition is a statewide outreach and awareness campaign to coordinate nonprofit and community-based efforts to ensure an accurate 2020 Census count for our state. The coalition is working together with the State of New Jersey Complete Count Commission and the U.S. Census Bureau to make sure the public has clear, accurate information about the importance of the upcoming Census.

Make sure everyone in New Jersey is counted. Join our census list to receive updates with events, messages and materials you can share with your family, friends and community.

The Census is Here: What You Need to Know 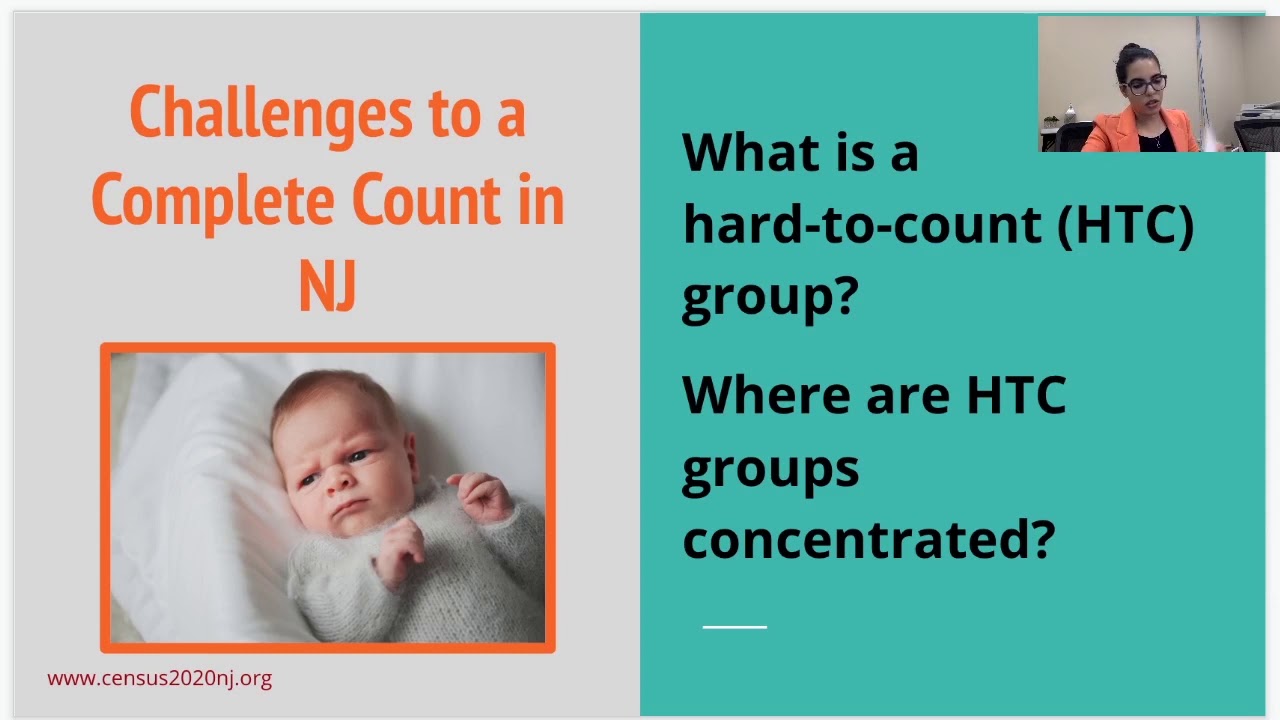 ACNJ VIDEO PLAYLIST: Make the case to #CountAllKids in 2020 Census

Policy counsel and new dad Peter Chen reflects on why the Census is important to him this Father’s Day.

New Data Shows Impact of COVID-19 on Families and Children

New data from the U.S. Census Bureau’s Household Pulse Survey show how households with children are being affected by the COVID-19 pandemic in near-real-time. Read more.

Though Census operations have been postponed, the reference date (April 1st) has not changed. It is important to complete your Census as soon as possible.

Our annual Newark Kids Count showcases why the 2020 Census is vital for community supports.

But first, let me take a selfie! Join in our #CensusSelfie Challenge and spread the word that you count!