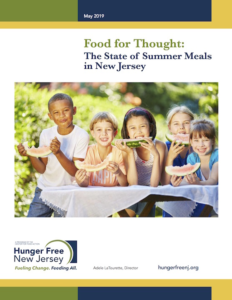 Food for Thought: The State of Summer Meals in New Jersey

This report release kicks off a statewide campaign to raise awareness of the availability of summer meals so parents and other caregivers know how to find them. We invite to join our efforts to spread the word!

Medicaid Expansion Leads to Healthier Mothers and Babies
BLOG: Let’s focus on the kids at both ends of the juvenile justice system