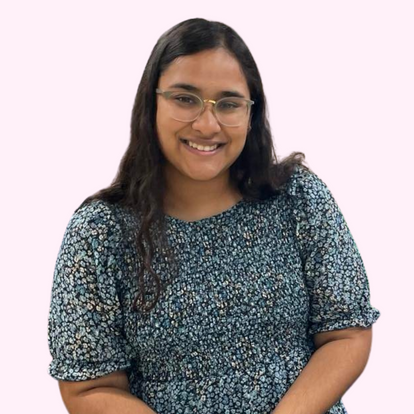 Over the past several years, those working on child abuse and neglect cases have raised public awareness concerning the overrepresentation of children of color involved with child protective services. This is not just an issue in New Jersey - it is a topic of national conversation. Looking at data compiled by the New Jersey Department of Children and Families, 84,162 reports of alleged child abuse or neglect were made in 2021, while only 3,008 of those reports came back with substantiated findings. This shows that only 3.57% of the reports made were actual cases of neglect or abuse. As seen by the graph below, out of the substantiated findings in 2021, Black and Hispanic children are represented at a rate 2-3 times higher than other groups. In New Jersey, almost all of these children and youth come from impoverished homes. This raises the question of whether the New Jersey Division of Child Protection and Permanency (DCPP) should be involved with these children, or if further scrutiny is required to avoid unwarranted state involvement. 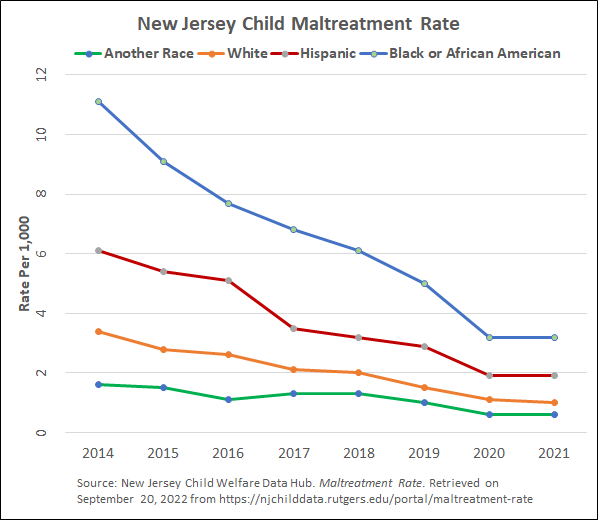 There could be many reasons for this overrepresentation, one being the result of excessive state supervision and more interaction through state poverty programs in poorer neighborhoods. Families who need to use social welfare programs normally have more supervision or interaction with the state in their day-to-day life. This phenomenon is referred to as the visibility hypothesis, which describes a disproportionate number of underprivileged children to privileged children within the child welfare system because poverty makes children more noticeable to child welfare authorities. Furthermore, there seems to be ignorance and intolerance of the “conditions of social and economic disadvantage in urban neighborhoods [that] leads to overvisibility.” The visibility hypothesis explains how the easily seen attributes of poverty combined with prejudice and lack of sympathy for these situations lead to families who need governmental assistance also being the families child protective services involve themselves with the most.

People who normally report to child services are laypersons who may see a situation and think it is neglect when, in actuality, it is just an incidence of poverty. Evidence shows that laypersons who have a lower socioeconomic background are less likely to report impoverished situations as neglect. This shows a lack of understanding from people of higher socioeconomic backgrounds to the difficulties that are presented in the daily lives of people who live in poverty. This misunderstanding leads to two types of misreporting: (1) underreporting actual instances of neglect, and (2) overreporting or incorrectly claiming neglect. These reports open the door for state involvement in a family’s life, which may lead to direct involvement from child protective services.

Traditional services applied by child welfare services may be ineffective when trying to remedy situations of poverty that appear to be child neglect. In most definitions, neglect is found if a child does not have all their basic needs met and could be harmed from their needs not being met. Under many definitions of neglect, poverty can be equated to neglect unless otherwise specified. If child welfare services become involved for all the reasons discussed above, then the determination made is based on a definition that automatically makes people who are living in poverty more susceptible to a finding of neglect. However, on top of that, public resources put in place to alleviate poverty are insufficient to actually relieve poverty, and there has been a growing trend to restrict aid when the need is increasing. There are also incidents of poverty that could lead to a situation that looks like neglect. For example, poorer parents may suffer from social isolation because there are fewer adults in their lives who can help out and provide support.

While there is not a clear answer to how this problem should be resolved, there have been a couple of suggestions. One proposal advocates for changing how child protective services interact with families. Instead of making the process an adversarial investigation, child welfare should come in non-adversarially and develop mutually agreed-upon solutions. An additional proposal recommends providing families social support that allows them a place to go for help before child proactive services become involved. Another way to efficiently use child welfare resources is to do blind removal decisions, where child protective service professionals make a decision based on an initial assessment of a case without certain demographics like race or the neighborhood where the family lives. This system was tested in Nassau County in New York. In 2010, 55.5% of the children removed from homes were Black. In five years, after using blind removals, this went down to 29%. Removing unnecessary information regarding socioeconomic factors may reduce the number of families in poverty involved with child protective services where there is no issue of neglect. While there is not a clear set of alternative measures that could be used to replace the current system in place, there is a definite need for a system that stops targeting families in poverty.

It is also important to look at how New Jersey courts determine what actions constitute neglect, and how the courts’ definition affects situations where poverty is a factor. N.J.S.A. § 9:6-8.21 defines neglect as:

“a . . . failure of [a] parent or guardian, as herein defined, to exercise a minimum degree of care (a) in supplying the child with adequate food, clothing, shelter, education, medical or surgical care though financially able to do so or though offered financial or other reasonable means to do so, or (b) in providing the child with proper supervision or guardianship, by unreasonably inflicting or allowing to be inflicted harm, or substantial risk thereof, including the infliction of excessive corporal punishment; or by any other acts of a similarly serious nature requiring the aid of the court.”

New Jersey courts have focused specifically on the phrase “minimum degree of care” to determine whether the parent or guardian’s action constitutes child neglect. Per the New Jersey Supreme Court, “minimum degree of care” means grossly negligent conduct. This conduct does not need to be intentional but can be anything from slight oversight to malicious purpose to cause injury. The Court provided a definition to determine the “minimum degree of care” because it was determined that it was more important to look at the actual harm that occurred to the child rather than the intent behind the guardian’s action. The Court also decided that this inquiry would be made on a case-by-case basis depending on the dangers of the given situation and whether the caregiver in the situation acted appropriately.

In 2011, the New Jersey Supreme Court held that a case of ordinary negligence is not enough to constitute child neglect. They described the attitude needed to find neglect as a reasonable person realizing the risks and acting with reckless disregard for others’ safety. The Court stated “[e]ven watchful parents find it a near impossibility to be aware of a child’s movements at every turn,” making a point that a single harmless accident does not constitute neglect. In making these decisions, the Court determined that the legislative intent behind N.J.S.A. § 9:6-8.21 was to protect children from unsafe situations rather than punish parents for a harmless accident. The Court made it clear that to be found guilty of child neglect or endangerment, a parent or guardian must willfully act in a way that is likely to result in an injury. The court decided on a lower standard than simple negligence because if simple negligence was considered neglect, then a normal accident could be considered neglect. This could have significant consequences on family life. Situations in which children are not being harmed and living healthy, happy and safe lives will be intruded upon by members of child protective services.

New Jersey courts have regularly decided that while poverty can be used as one factor in deciding whether a child is being neglected, poverty alone cannot constitute neglect. This is illustrated in a case where a mother brought her children to the Division looking for aid and was fully willing to cooperate with the Division’s recommendations because she did not have housing. The mother had already tried to secure a job, welfare and housing, but was unsuccessful mostly due to child care issues. The Division noted that the children seemed healthy and safe. Despite this, the family court judge said the family’s homelessness was due to the mother’s poor planning for coming to the state with insufficient funds to travel home, and ruled for neglect. The Appellate Division reversed this ruling, stating that the mother’s poor planning was “at least in part a side-effect of poverty.” However, she sought help from the resources available to her to do what was best for her children. The Court also emphasized the importance that impoverished and homeless parents feel like they can use resources meant to help without fear of being punished for “poor planning.”

While poverty alone cannot cause a finding of neglect, poverty alone can be a reason why state actors get involved with a family. This involvement can lead to many complications. One complication is that children can be separated from their families, only for a later appeal to make it clear that the original decision and separation were made wrongfully. Furthermore, when looking at poverty, the minimum degree of care standard of gross or wanton negligence is still in effect. Courts consider poverty as one of many factors that will be weighed to determine whether neglect actually exists, but poverty alone is not a basis for a finding of abuse or neglect.