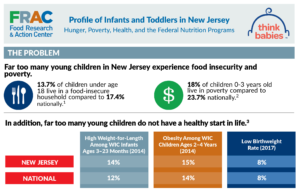 New Jersey lags behind nationally when it comes to tapping into federal programs to feed young children living in low-income households that struggle to put food on the table, according to new research from the Food Research & Action Center and the Think Babies™ campaign.

“SNAP serves as the first line of defense against hunger and is critical to keeping and lifting low-income households — including those with children — out of hunger and poverty,” LaTourette added. “WIC helps pregnant women, new mothers and children eat healthier. Children who participate in WIC also are likely to have better academic outcomes than low-income children who do not benefit from the program.”

ZERO TO THREE created Think Babies to make the potential of every baby a national priority.
Think Babies state partner Advocates for Children of New Jersey is collaborating with Hunger Free New Jersey and others to advance policies and investments benefiting infants, toddlers and their families, particularly those that promote good nutrition and strong physical and emotional health.

Funding partners for Think Babies include the Robert Wood Johnson Foundation and the Perigee Fund. Learn more at www.thinkbabies.org.